Pretty handy. Since Kafka is at the heart of business services, and services become more distributed and complex, headers make managing these environments much easier.

Kafka Headers act in much the same way as headers for HTTP. They add metadata to your message on top of the payload and key that you get with a Kafka message. They’re useful for annotating, auditing, monitoring and routing of events as they flow through Kafka.

This helps support a number of different use cases including:

In Lenses 4.1, we’ve introduced querying headers alongside your Kafka message and key with SQL. Querying header and payload looks like this:

Having access to metadata in your Kafka headers can drastically accelerate time investigate issues such as for an IT incident or a compliance audit. An operator will have more business and technical context as they explore their Kafka events.

One of the biggest use cases is observability.

It’s important to be able to view transactions and data flows as they traverse different applications and APIs connected to Kafka.

APM solutions such as NewRelic and Dynatrace have taken advantage of Kafka headers to include IDs in Kafka messages, thus enabling distributed tracing.

Jaeger too. The OpenTracing Kafka Client allows you to trace spans across Kafka clients.

Then using Lenses to query headers can be particularly handy during an investigation.

The same might apply for governance. You need governance to identify the lineage and provenance of the event.

Here’s a quick example for how to use the OpenTracing Kafka client to instrument your Kafka messages by injecting a trace ID into Kafka message headers. The walkthrough will involve:

1. Get your docker command and license key from lenses.io/box. Or alternatively request a Trial to use Lenses against your own Kafka.

Ensure you have at least 4GB RAM.

We’ll be connecting to an external application so adjust the ADV_HOST accordingly if you’re not running it on a localhost. Also ensure ports 3030 (HTTP for the Lenses UI) and 9092 (for the Kafka client) are available.

3. Access the Lenses UI from http://<host>:3030.  The environment can take a few minutes to be fully available.

The Jaeger client will allow us to collect and visualize traces. 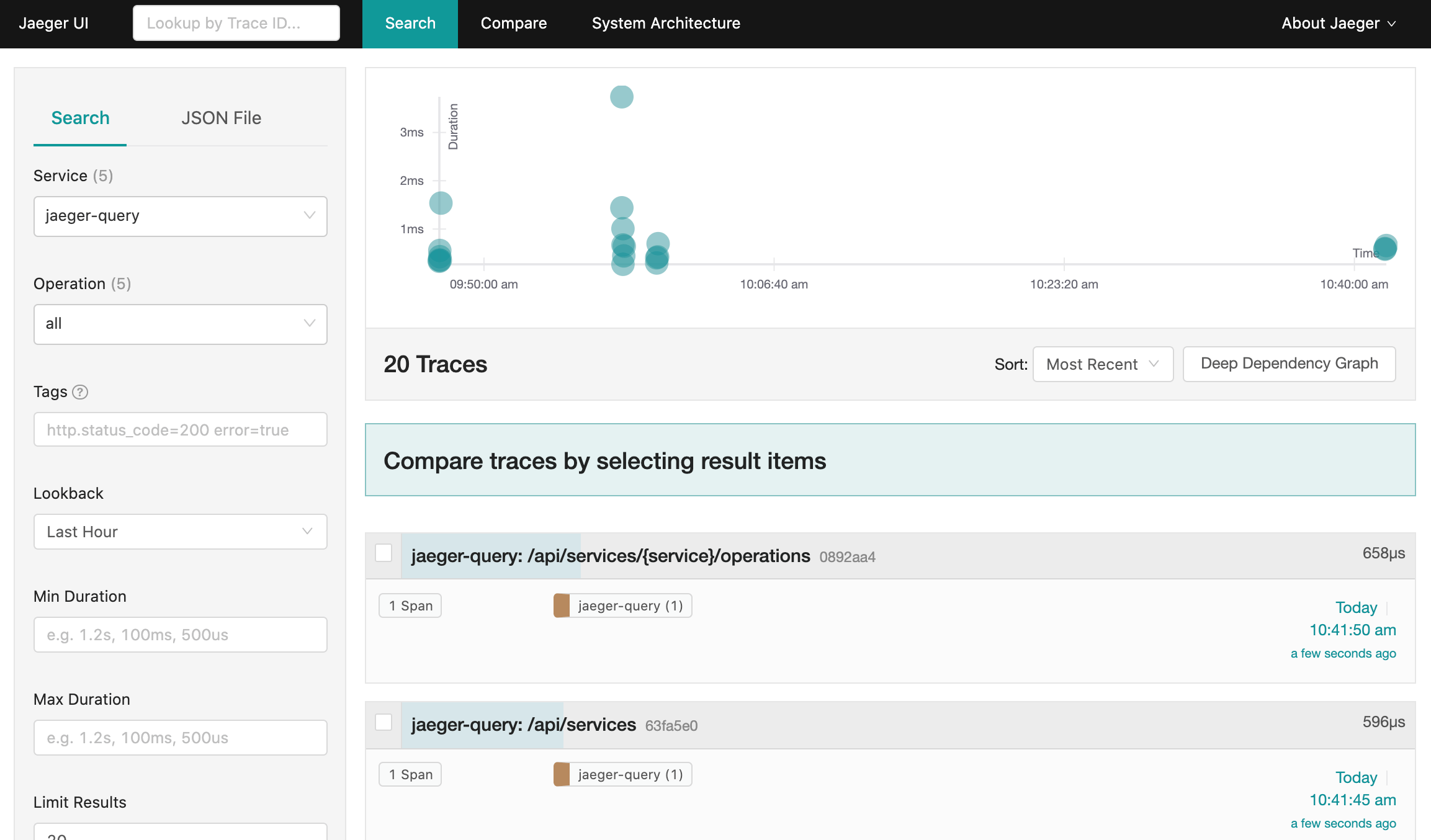 If you’re using Maven, you'll find the project on Github.

Run the application with two arguments: the broker hostname:port and the second being the message to be published to the traces topic.

1. From Lenses, access the Explore page and find the traces topic from the data catalog. The topic was automatically created by the producer.

2. If you’ve generated very few events, Lenses won’t have enough data to understand the serialization so you may need to hard-set the serialisation type for the Key and Value to String:String. 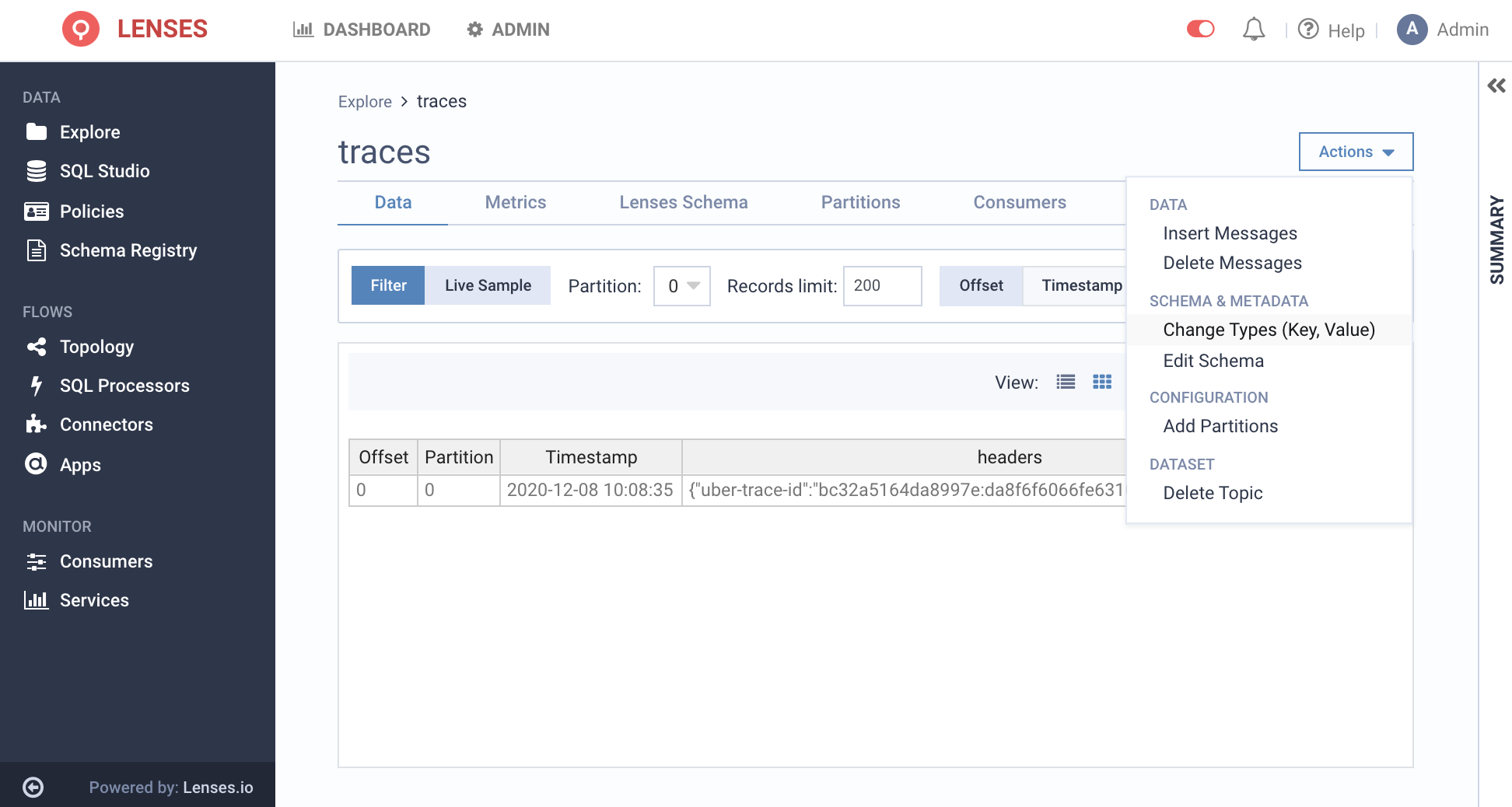 3. From the Lenses SQL Studio, run the statement 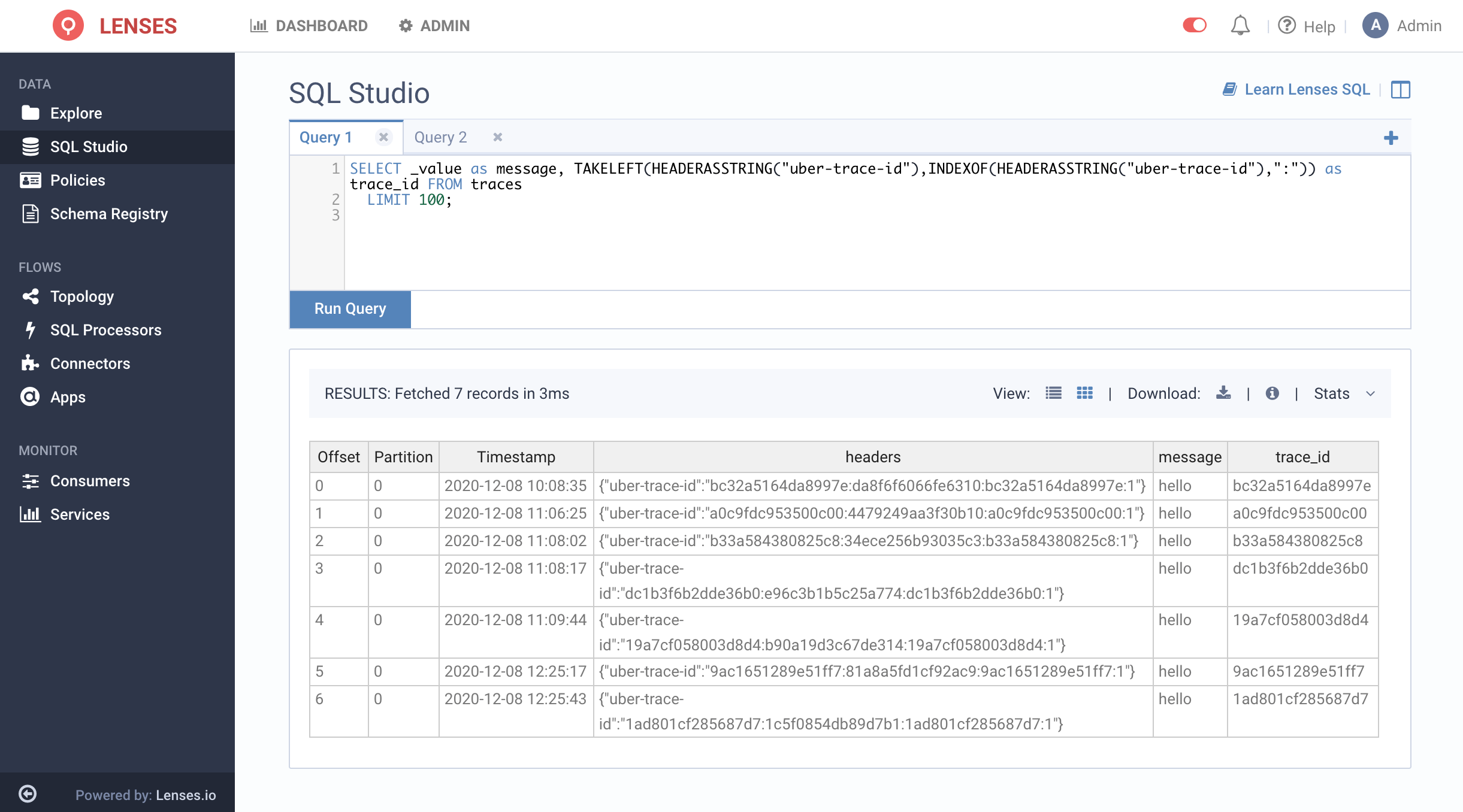 4. From the Jaeger client ensure you can see traces for the service lenses.io_test 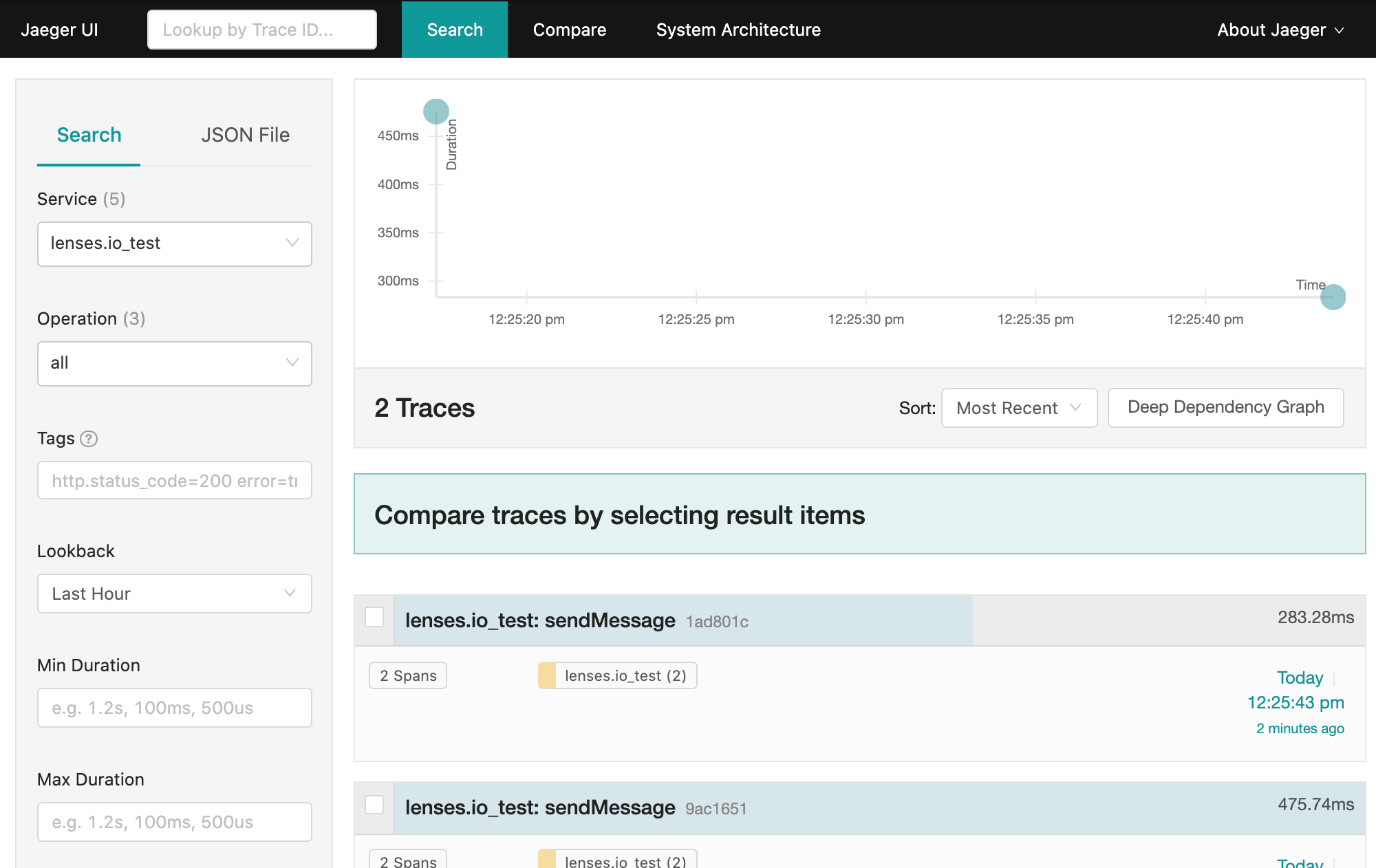 5. Take one of the trace IDs returned in the Lenses SQL response and use it to lookup the trace. 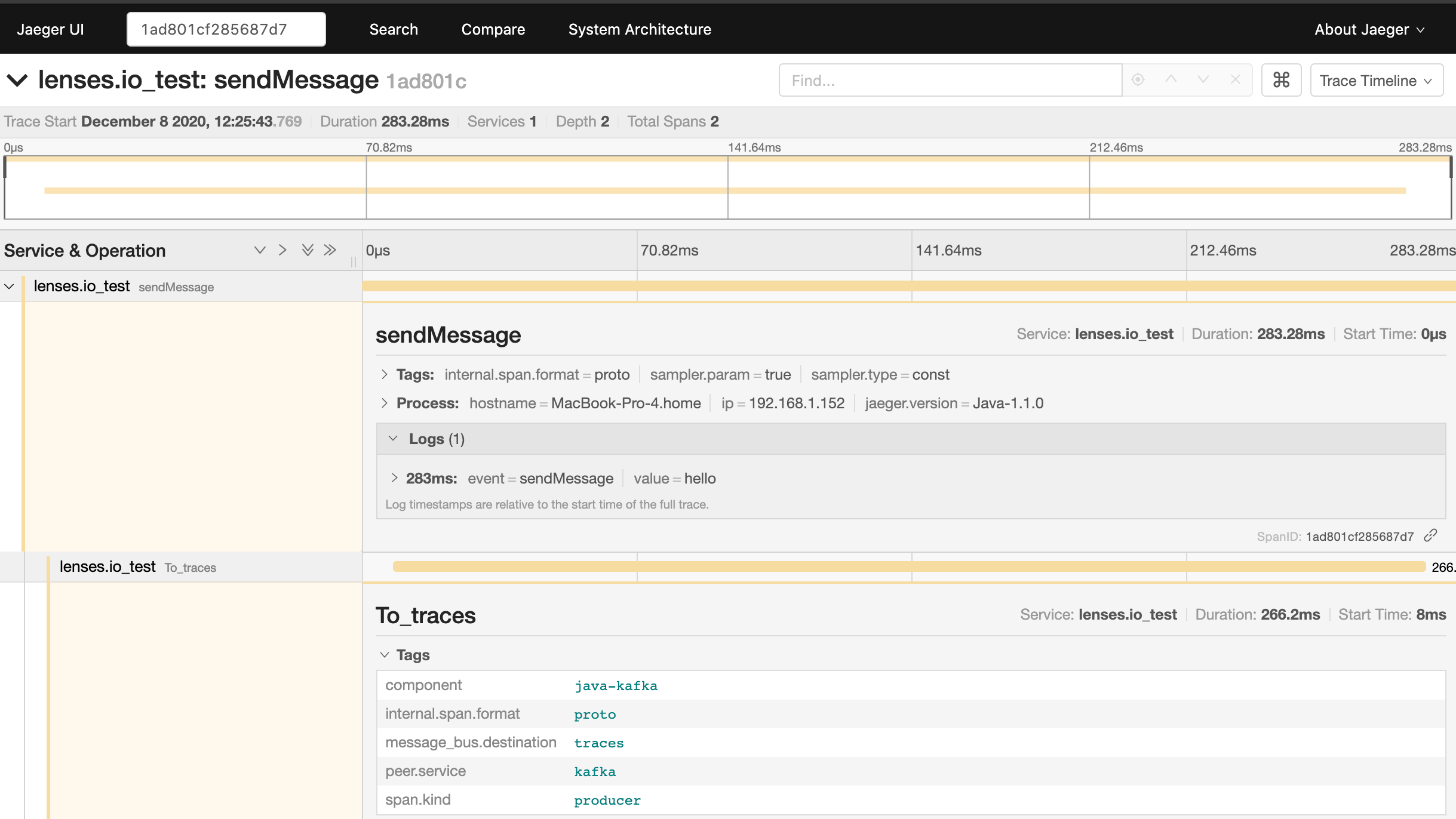 Explore the full range of SQL use cases for Kafka. Or start a free Trial against your own Kafka cluster