All about Coyote, the open source tool that automates testing of our data streaming technologies. For more, visit Coyote’s Github repository

A few days ago we open source’d Coyote, a tool we created in order to automate testing of our data streaming technologies.

Coyote does one simple thing: it takes a .yml file with a list of commands to setup, run and check their exit code and/or output. It has some other functionality too, but its essence is this. The source code is short, I don’t expect any praise for it; coyote is a tool, a useful one.

We use it for environment and operations testing, as well as runtime meta-testing.

Runtime meta-testing is a shortcut to proper software-run-tests. If you trust your software to be robust enough, then instead of verifying the actual results (e.g entries in a database), you can scan the output of the software for (un)expected logs. Of course this kind of tests should not be used without awareness of the underlying dangers.

Coyote has two important outputs; (a) an HTML report with the commands ran, their exit status, stdout, stderr and some statistics, (b) its exit code which up to 254 indicates the number of errors occurred and at 255 is like saturation arithmetic and means that 255 or more errors occurred. The HTML report is for humans and the exit code is for machines. We use it with Jenkins CI where, amongst other things, we need a quick visibility of failures and verbose output for debugging. 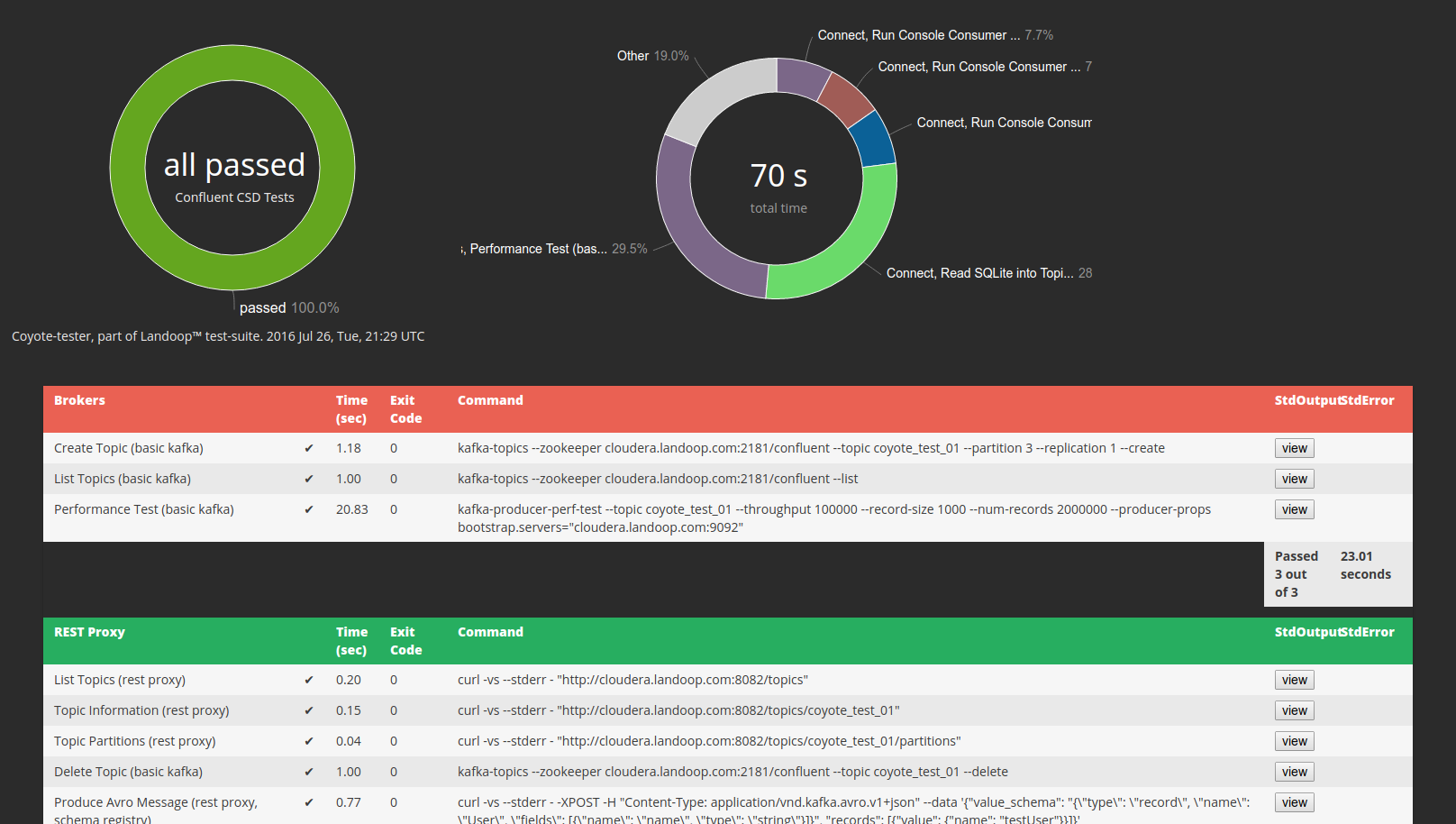 Test configuration is set via a YAML file, partially inspired by Ansible. Let’s see a real world example before we delve into specifics. Below are two of our Box tests, a basic HDFS/Hadoop test and a Spark test. I’ve add some comments to explain what happens for the non-intuitive parts.

In practice you write your tests once or a few times and run them many times. The person running the tests and/or evaluating the results may be not the one that wrote them. Even the creator after a couple months can forget the purpose of each command. In Lenses.io we also use the coyote configuration files as reference examples for both newcomers and ourselves.

Currently coyote supports this settings for each command:

Also it supports some special strings:

Some features you may miss are:

Most of the time it is Jenkins that runs our tests. 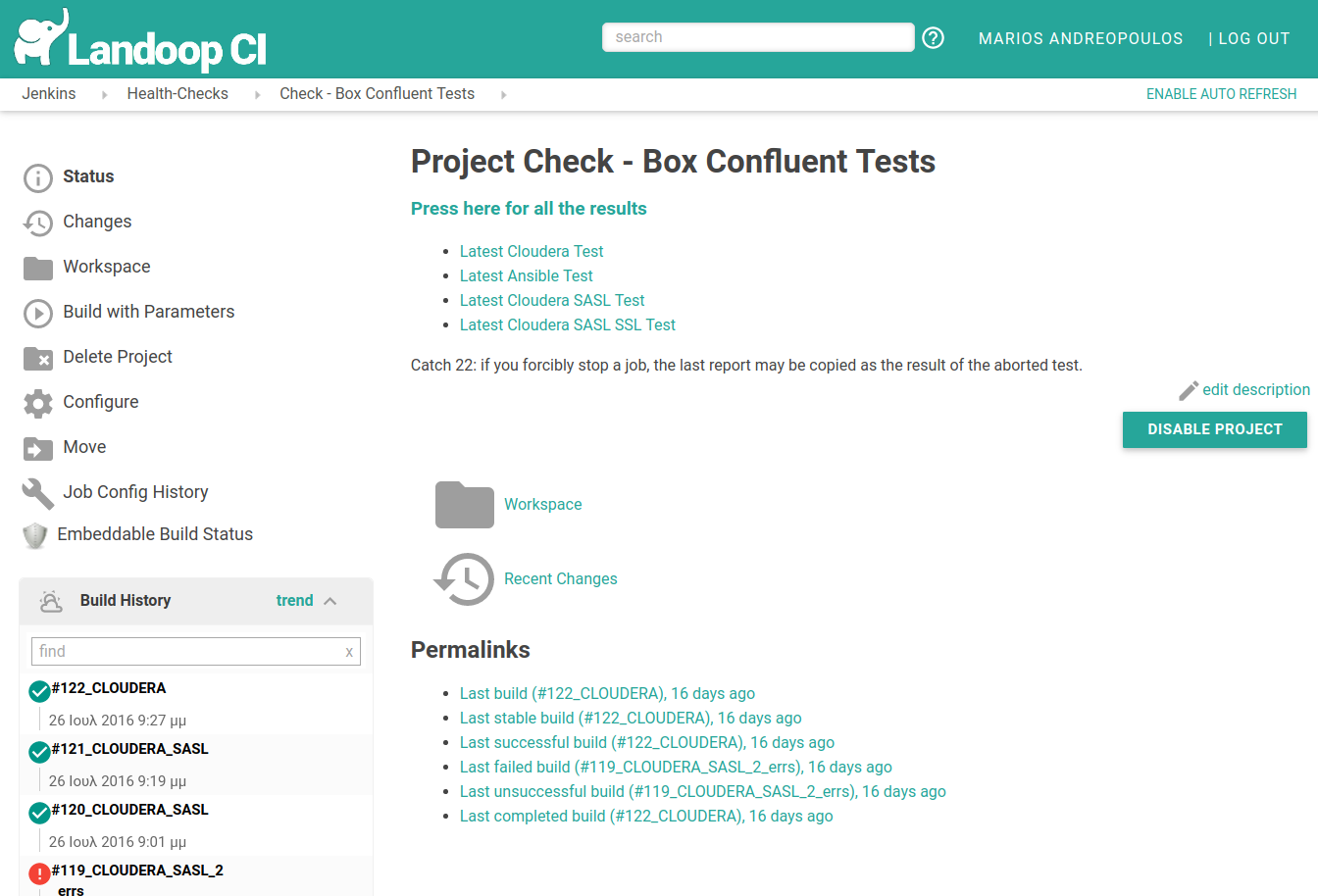 We’ve set it to use Coyote’s exit code not only to mark the build as failed, but to add the number of errors to the job name, to grant us quick visibility of the current status. We also keep a history of test reports. 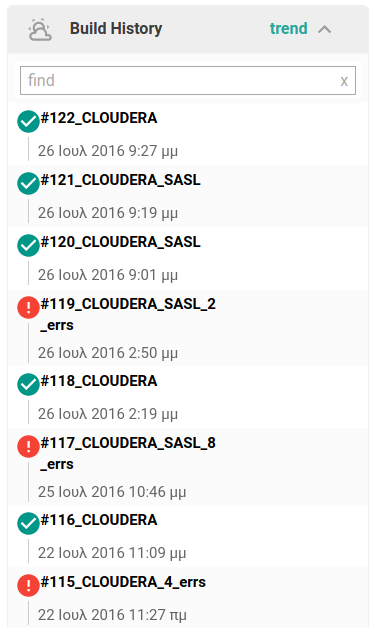 Enabling or disabling tests is easy, add a boolean variable for each test group and then a single bash line to set its skip flag to true: 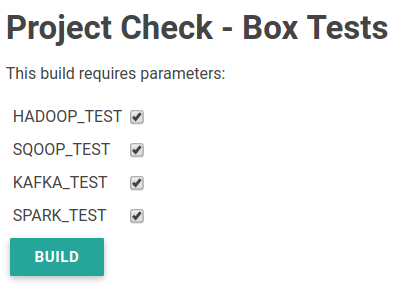 Although code testing is such a renowned practice, our research didn’t reveal many testing tools for the latter part of the DevOps pipeline, such as the deployment and execution phase. Coyote’s turnaround has been great until now and this is the reason we wanted to share it.

Of course, as it is with every such effort, we are bound to re-invent the wheel for some part. The codebase is kept small and Go makes it easy to add features as we go.

For the time being we don’t have a release plan, just grab the latest coyote commit from master, it works:

To make changes to the source code:

Should we make any breaking changes to the configuration format, we will explore how to communicate about it and protect Coyote’s current users.

If you are interested in examples or extending the code, visit Coyote’s Github repository.

Thank you for your time, Marios.