Lenses 2.2 Release is focusing on data ethics with the brand new data policy module and the enforcement of data visibility, with a new SQL engine

The Lenses team is proud to announce the release of Lenses 2.2. Our mission is to deliver a platform that makes it easier to develop and deploy data-intensive applications. This release has two main themes.

The first one is data ethics. With the 2.2 version, there’s a new data policy module that allows a Data Officer to set rules on how it should be protected! Sensitive personal data information should be protected. The second theme focuses on data visibility. A new SQL engine targeting bound queries - table based query – has been added to address the shortcomings of the previous one. Writing queries has become a lot easier with the addition of context-aware IntelliSense, not just autocompletion. But the real power lies with the engine under the hood. Being able to perform aggregation and joins on data at rest brings a new dimension on data visibility on Lenses. As an example, you can try your joins on data at rest before you set a continuous SQL code (or as we name them SQL processors) to process your streaming data.

A full list of all the improvements and fixes made for this version can be found on the Release Notes.

Times have changed and a new type of economy has taken shape. The digital economy is built on streams of data being created, collected, combined and shared. Analyzing and acting on data insights can lead to new types of risk which include illegal use data for purposes to which its owner has not agreed. Such practices might end up damaging consumer trust in the brand.

Digital risk is not limited only to cyber-security threats. Businesses now accept that they are facing risks resulted from bad ethical data practices. Therefore, mitigating such threats is critical for organizations.

Lenses allows data officers to set ethical controls for all data access via the platform. With an easy interface, a new policy can be added, for example, to keep only the last 4 digits of a credit card field. 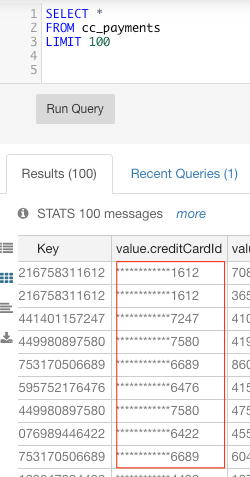 With the policies in place, sensitive data is not exposed via Lenses.

A successful DataOps platform requires great data visibility. While there is always room for improvement, version 2.2 delivers a much-improved experience. Lenses relies on SQL to empower you, the user, to see and process your data. With this release, we have made it a lot easier to write the SQL to give quick insights into your data.

A new SQL-engine for Tabled SQL queries (data at rest queries) has been introduced. Amongst other great things it has support for aggregation. You can now run queries like the next one for data at rest:

LensesⓇ is the perfect antidote for Kafka blindness.

The new engine introduces context-aware code completion for the Lenses SQL editor and its CLI. The brilliant IntelliSense goes beyond listing your topics; it can suggest the table fields based on the current position in the SQL code with function and user-defined function support.

With clients running Lenses on various clouds, there has been a request to allow the user of Lenses to handle user authentication themselves. Using the new authentication mode, it is possible to separate the authentication layer from Lenses into your own authentication solution. As an example, it would be possible to use JSON Web Tokens (JWT) injected via a proxy. This also opens the door to integrate with your own Single-Sign-On solution.

A lot of good work has been done under the hood to improve the existing functionality and address issues raised by our customers. The release notes capture all the work, from addressing performance on Kafka Consumer Groups information to hot reloading of the user configuration file, to better integration with Kubernetes.

If you are running the Lenses environment for Developers, don’t forget to docker pull to get the latest updates: