This article presents how Avro lib writes to files and how we can achieve significant performance improvements by parallelizing the write. A (JVM) library has been implemented and is available on Github fast-avro-write

The reason we proceeded with this implementation was a project that required writing multiple Μillions of Avro messages from Kafka onto a star DW (data warehouse) in HIVE (HDFS). You might have heard about (or even dealt with) the challenges of working with HDFS. You can read more about it in this article available here

The bigger challenge was building an efficient Kafka Connect HDFS / Hive Sink to cater for the specific requirements of landing large volumes of data to HDFS in batches and being able to track completeness while each batch can spread over multiple tables and it can be sliced into multiple chunks which are processed simultaneously.

What we originally noticed was a performance bottleneck when writing records taken out of Kafka to the external HIVE table location. We tend to get ~1M records from Kafka at once and write them to an Avro file(-s) according to the table partitioning. With the existing Avro library (apache org.apache.Avro) we could achieve about 60k records/second write speed.

Spending ~16 seconds writing 1M records means we are not consuming data in real time and the ingestion process is delayed. After spending some time tweaking the HDFS FileSystem configuration for buffer size and socket buffers hoping to improve performance, we shifted our attention to the Apache Avro library to understand how it works. To make things clear, we were targeting at optimizing writes for Hive tables with 100+ or even 300+ columns (those are the kind of records sent over Kafka); for smaller schemas the improvements are not as significant.

Let’s look how we would write an Avro file with the Apache library:

In the above example, we create the writer and as we iterate through each Avro record we write it to the file. Before moving on to the fast-avro-write library let’s have a high-level view of how the Avro DataFileWriter works. The diagram below describes the bytes flow; we have two level of buffers (via de BinaryEncoders - the actual instance will end up being a BufferedBinaryEncoder) and an OutputStream which in most cases it’s likely to be buffered as well.

While the vout encoder will end up writing to the output stream; is also responsible for writing the Avro metadata (below is the code we are using from our library but it does nothing more than the apache.avro lib) before writing the Avro data blocks.

We will not go into the detail of the data block writing (a quick check on DataFileStream#DataBlock in org.apache.avro library will give you the details of what happens). The vout targets the OutputStream as you can see from the code above.

To get better performance we had to parallelize the write; we expect the input to be a collection of records to write at once rather than one record at a time. Given the parallelization factor we will split the incoming collection into chunks and process each one individually and in parallel. Each chunk gets a first layer buffer allocated and as it fills up, the content will be sent to the second buffer. 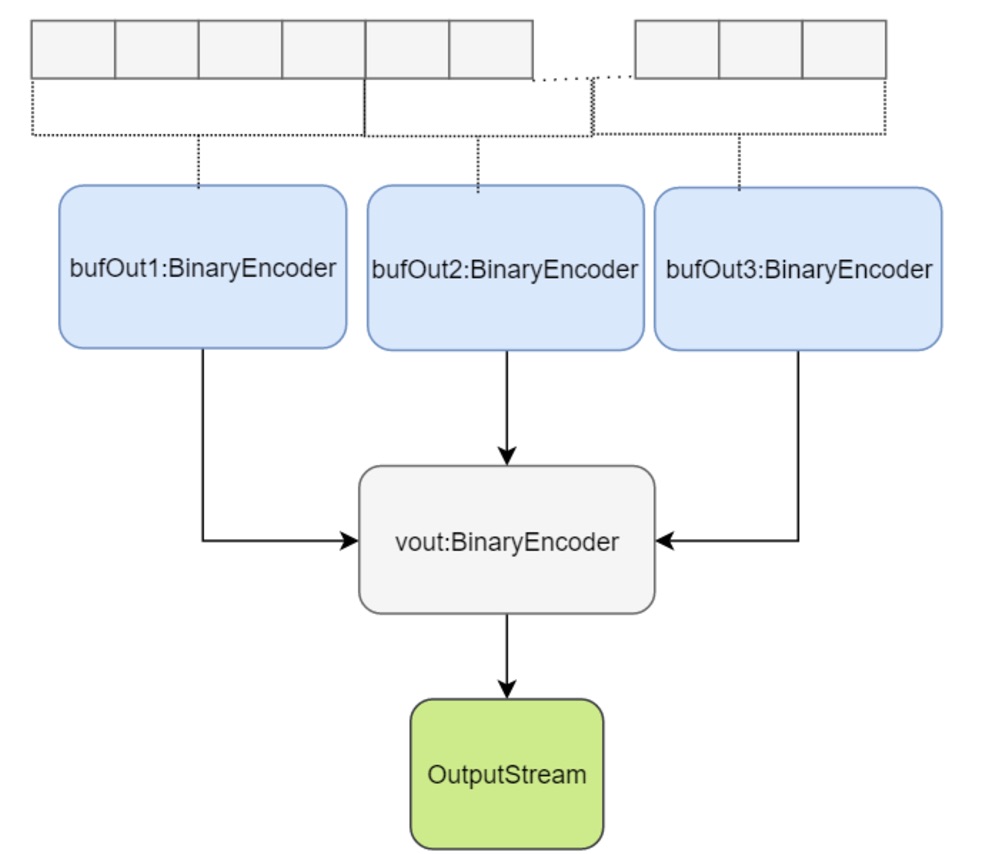 Since we write concurrently to the first layer of buffers we have to serialize the write to the second buffer layer. As a result “the order of the records in the file might not be matching the order provided in the incoming collection”. So here is how you would write using the new library.

We are using the following class to generate Avro GenericRecord instances:

We are doing 10 runs for each mode and take the low/high time measured. These are the figures obtained (all values are in milliseconds)

So with paralellization in the serialization you can achieve 200% the performance of the default Avro library.

The API allows you to specify a threshold for which parallelization is avoided and it falls back to a single threaded write. The default value is 50k but it can be overwritten by the user.

Parallelization level shouldn’t exceed the number of available CPUs. Furthermore you can see from the stats table above the impact over performance when using higher level of parallelization.

To get the best performance there needs to be a bit of testing done to see what’s the optimum setting given your incoming schema for the average collection size it would process at one time.